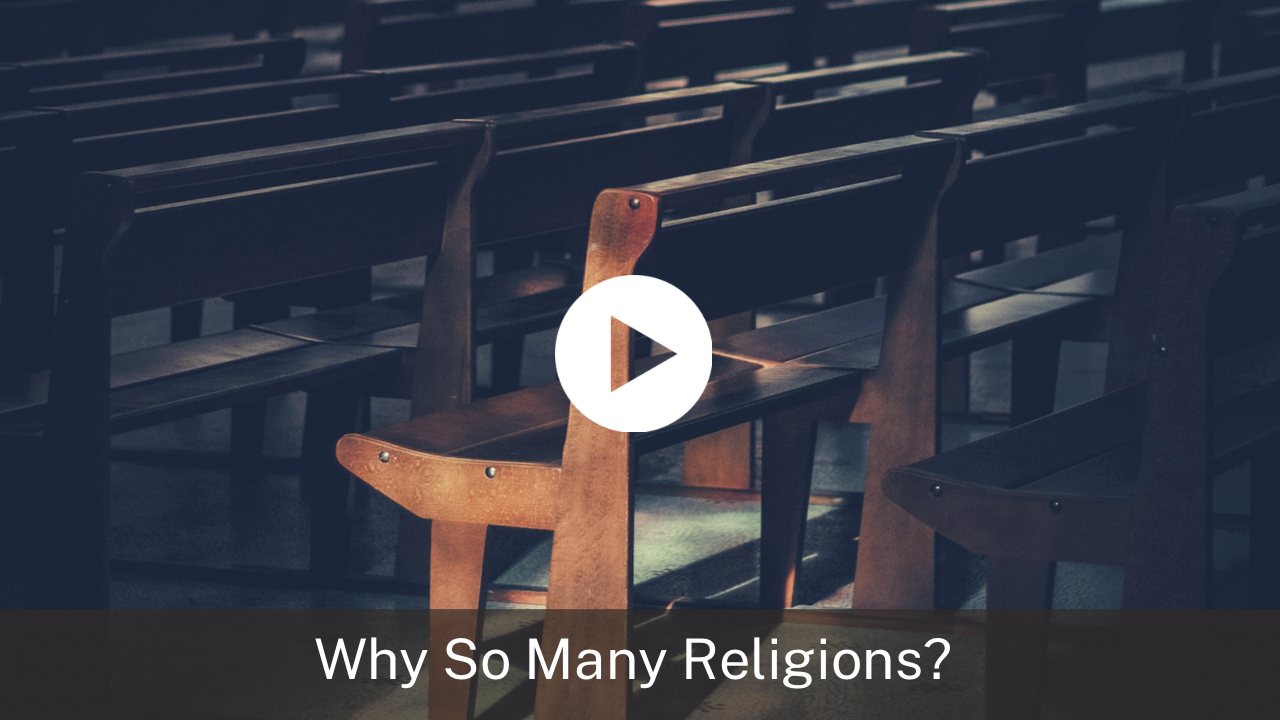 The devil wants to create confusion. The more choices there are the more confusion. If many religions exist, people tend to think, “How can Christianity be the only true belief? That seems narrow minded.” The Bible says there is only one way to God, and only one way to heaven. Many believe that each person finds God in their own way. Perhaps you think they all are acceptable, but whose to say which one is actually right?

Every person is left with only two choices in this life: either believe the unchanging Bible and it’s promise of salvation, or follow the path of changing beliefs and man-made religion, and end up on a road that leads to destruction.

Matthew 23:9, “For one is your Father which is in heaven.

Acts 4:12, “Nor is there salvation in any other, for there is no other name under heaven given among men by which we must be saved.”

1 Timothy 2:5, “For there is one God, and one mediator between God and men, the man Christ Jesus.”

In his book, “How to be Born Again” pg. 2, Billy Graham said this about why Christianity is unique; “Most of the world religions are based on Philosophical thought, except for four:  Buddhism, Judaism, Islam, and Christianity. These four are based on personality. But only Christianity claims resurrection for its founder.”

No other religious leader died for our sins, and rose from the dead. This one fact makes Christianity unique. Some false religions are simply founded by one man. The person states that god or an angel appeared to them and told them “the way.” This person didn’t realize that it was actually a demonic spirit that appeared to them, and not God. They believed the lying spirit, and then wrote a book about this lie. Out of their personal deceived experience is birthed an entire religion with millions of followers. It’s amazing that people will blindly believe one man’s vision, his false teaching and one book, without any investigation to verify it.

The Bible has thousands of scholars, historians, scientists, and archeologists that have researched its claims for hundreds of years. With all that research, no major discrepancies have been discovered, and the few minor ones have been cleared up by good scholarship.

Also, the Bible isn’t based on one man’s vision or just one book. It is based on 66 books, written by 40 separate authors, over a 1,500 year period. The writers were on three different continents, spoke three different languages, lived hundreds of years apart, and wrote about one man; Jesus Christ. There are also no discrepancies among these 40 authors.

Also that he would suffer for our sins, be beaten beyond recognition, wear a crown of thorns, his side would be pierced, not a bone broken, die on a cross, rise the third day, be seen of many, and ascend into heaven.  No other religion foretold the future and had someone fulfill it exactly. But most importantly, no one died for our sins and rose from the dead.

Jesus warned us that in the last days there would be those that deceive many.  Jesus also said men are like sheep, that follow anyone. In other words, men can be foolish and easily led astray.

The Bible has sold billions of copies throughout the years, even though many leaders have tried to destroy it or outlaw it. The best-selling book lives on.

Christianity may seem narrow minded, yet its open to all. No one is excluded. The path to heaven is a narrow road and Jesus said He is only way. If you want to live at His house, you do it His way.

The reason no man has been able to rid the Bible from existence is because Jesus said in Matthew 24:35, “Heaven and earth shall pass away, but my words shall not pass away.”

Because He spoke those words, the Bible will forever remain.