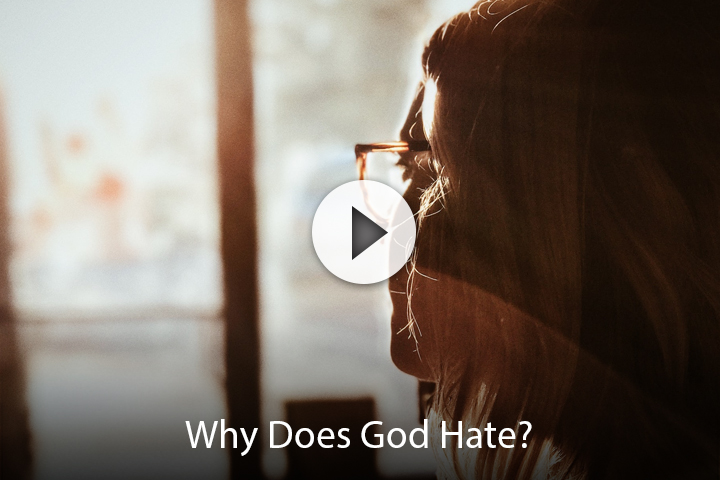 Why Does God Hate?

Have you wondered how God can hate if He is a God of love?

God does not hate with an emotional outburst as humans do. Instead, He hates from a righteous stand against evil. He hates all that is evil, not only because it is opposed to His good and holy nature, but because it’s harmful to us. God loves everyone and He proved it by dying on the cross for our sins and rising from the dead. God loved us even when we were opposed to Him, as Romans 5:8 states.

All throughout the Old Testament He proved His love for mankind. He told Noah to preach for 120 years before He brought the flood. Everyone could have been saved in the ark, but no one repented except for Noah and his family. He forgave the city of Nineveh of their wickedness, and didn’t destroy it because they repented. He warned Lot to tell his family He would destroy Sodom and Gomorrah because the entire population was wicked. He delivered Jonah from the great fish when he repented, and He delivered Israel countless times from their enemies when they repented from their idol worship.

Since God is righteous and holy, He must hate what is opposed to love and good. Psalm 5:4 says, Evil may not dwell in your presence. We cannot love with a perfect love, nor can we hate with a perfect hatred. Only God can because He’s perfect.

The Encyclopedia of Biblical Words, page 325 states, Hate not so much as an emotional response, but as a value judgment expressed in a choice to have nothing to do with what is hated. Hatred becomes a dominating emotion that robs one of judgment and of compassion, but God’s hatred is different. His hatred is always appropriate, focused on evil and the evil-doer, and God’s hatred is always balanced by his attributes of love and compassion. Because God is the moral judge of the universe, He must make distinctions between good and evil. Because God is wholly committed to good, He must react to wickedness and act passionately, but wisely, to punish.

Matthew Henry’s commentary, page 750 states, He hates nothing He has made, but fools of their own making and those He hates.

Jamieson-Fausset-Brown commentary, page 776 states, Not with the human passion, but holy hatred of their sin, which required punishment to be inflicted on themselves.

Where exactly does it say in the Bible that God hates?

It goes on to list the seven things He hates.

Many more verses in the Bible demonstrate that God hates sin and wickedness. Did you know that we as men are also supposed to hate the things God hates?

Proverbs 13:5 says, A righteous man hateth lying. King David said, I hate every false way. I hate vain thoughts, and I hate and abhor lying. Each of us should mature to the point where we hate every evil way. Everything God hates, we should hate.

Nelson’s Dictionary, page 544 says, Believers ought to love their enemies as Matthew 5:43-44 says, but hate their enemies, as Ephesians 5:3-14 states and Revelation 2:6.

In today’s world, men hate God instead of hating evil.

Jesus said in John 7:7, The world cannot hate you, but me, it hateth, because I testify of it, that the works thereof are evil. Then He said in John 15:18, If the world hates you, you know it hated me before it hated you. He also said, inJohn 15:23, He that hates me, hates my father also.

Christians are instructed to love all, withhold judgment, and forgive everyone. We must also mature to the point that we hate what God hates, and love what He loves. The Lord hates every evil way, and everything that opposes His Word. Do you?