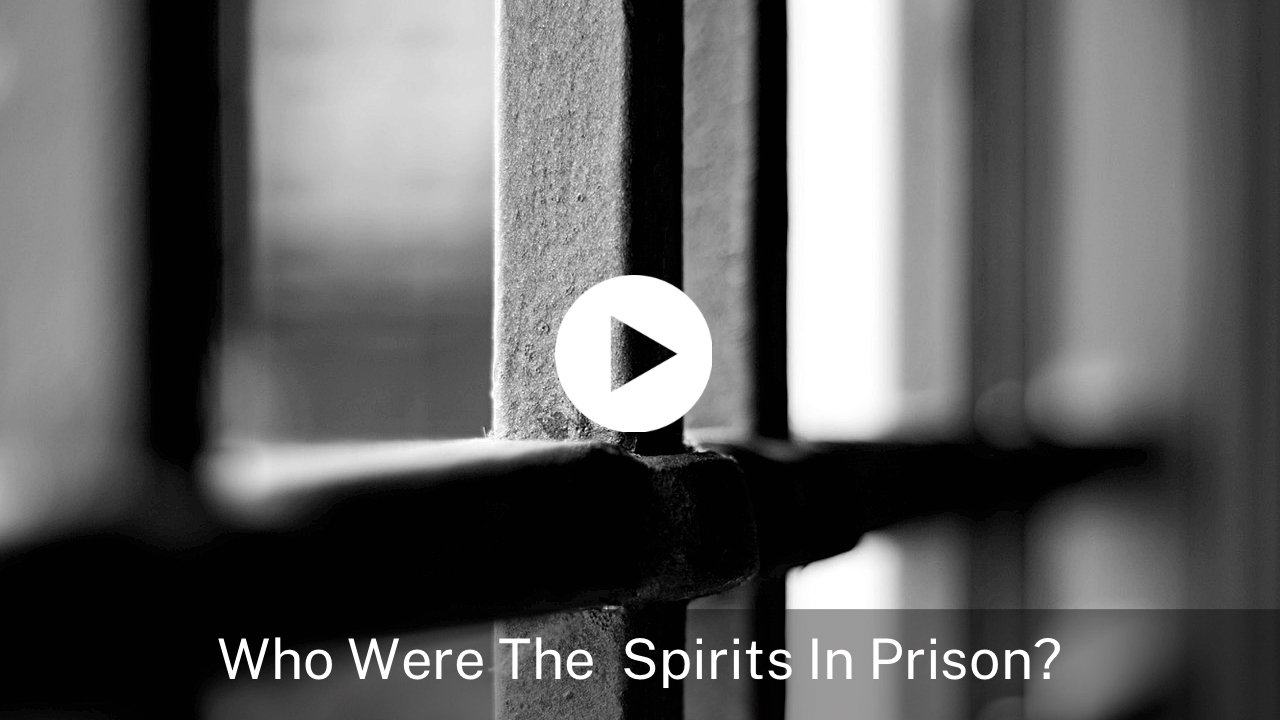 1 Peter 3:19–20 reads, “By which also he went and preached unto the spirits in prison; which sometime were disobedient, when once the longsuffering of God waited in the days of Noah, while the ark was a preparing, wherein few, that is, eight souls were saved by water.”

This is the only verse in the Bible regarding this issue. There is no way to know for certain. However, there are three different views, or possibilities identifying who they were:

There are commentary opinions on this topic as follows:

Baker Commentary on the Bible

“The fallen angels, who corrupted the generation who lived before the flood…. The spirits in prison are not the souls of dead human beings but fallen angels.”

“Among evangelical Christians, there are two commonly accepted interpretations. According to the first, Christ went to Hades in spirit between His death and resurrection, and proclaimed the triumph of His mighty work on the cross. There is a disagreement among proponents of this view as to whether the spirits in prison were believers, unbelievers, or both. But there is fairly general agreement, that the Lord Jesus did not preach the gospel to them. That would involve doctrine of a second chance, which is nowhere taught in the Bible.

The second interpretation is that Peter is describing what happened in the days of Noah. It was the spirit of Christ who preached through Noah to the unbelieving generation before the flood.  They were not disembodied spirits at that time, but living men and women who rejected the warnings of Noah and were destroyed by the flood. So now they are spirits in the prison of Hades. This second view best fits the context and has the least difficulties connected with it.”

“The most satisfactory explanation of 1 Peter 3:19–20 seems rather to be one proposed . . . by Augustine: the passage refers not to something Christ did between his death and resurrection, but to what he did “in the spiritual realm of existence” (or “through the Spirit”) at the time of Noah.  When Noah was building the ark, Christ “in spirit” was preaching through Noah to the hostile unbelievers around him. . . . The people to whom Christ preached through Noah were unbelievers on the earth at the time of Noah, but Peter calls them “spirits in prison” because they are now in the prison of hell.”

“Between Christ’s Death and Resurrection His living spirit went to the demon spirits bound in the abyss and proclaimed that, in spite of His Death, He had triumphed over them…Spirits in Prison: this refers to fallen angels (demons) who were permanently bound because of heinous wickedness.”

“The sin of these people, they were disobedient and rebellious. Their bodies were drowned (flood) and their spirits cast into hell, which is called a prison.”

“Some believe the reference is to departed human spirits, especially those of Noah’s day who heard preaching by the Spirit or by the pre-incarnate Christ through Noah. These spirits, who are disembodied, now await final judgment. Others believe the phrase refers to the spirits of the departed saints of the Old Testament to whom Christ, at His death proclaimed liberty from the bonds of death.

However, the Greek word for spirits used in this verse is never applied to human spirits. It is always used to refer to supernatural beings, both good and evil

The most logical explanation of this passage is that Jesus made a proclamation of His victory over death to the rebellious angels who had been placed in prison.”

“Nor is the phrase here “preached the gospel” (evangelizo), but “heralded” (ekeruxe?) or “preached”; but simply made the announcement of His finished work.”

The majority of scholars believe they were the fallen angels because the word for “spirit” used here refers to supernatural beings, and not human spirits however some scholars disagree with the definition of that word. In my personal opinion, I would agree with Matthew Henry, Wayne Grudem, and Believer’s Bible: The spirits in prison were the rebellious people who rejected God and Noah’s preaching before the great flood.

There are two reasons for my opinion, which means very little since no one knows for certain:

The word “longsuffering” is used in 4 verses in the Old Testament and 13 in the New Testament. Each time it refers to God’s attribute in waiting for people to repent, and not referring to fallen angels. It connects the waiting with people.

Jamieson, Fausset & Brown’s Commentary page 1478 says, “if haply (perhaps) men in 120 years of grace would repent until the end of his waiting came…A long period of God’s longsuffering and waiting…which rendered the world’s unbelief the more inexcusable.”

Notice he states it was the world’s unbelief and God waiting to give them time to repent. It is not referring to fallen angels. God is always gracious and patient with men in order to keep them out of hell. God always directed any kind of preaching, or announcement to people.

Also, in reference to the word prison: the word is used in Isaiah 14:17 where Satan didn’t open the house of his prisoners, referring to people. Isaiah 61:1 says, “and the opening of the prison to them that are bound” and Isaiah 24:22 says, “as prisoners gathered in the pit.” Each time the word prison is used it refers to people in prison, not fallen angels.

In addition, the word disobedient or disobedience, is used 17 times in the Bible, and every time it refers to people not fallen angels.

Second, I have difficulty believing Jesus would take any time or effort proclaiming His Victory to the fallen angels. During His earthly ministry when encountering a demon, which most agree they are fallen angels, He simply gave a command for them to go. Only once did He ask a name, and that was just to inform us of how many demons a person can have. He didn’t waste any time or words with devils, so why take the effort here? He also never proclaimed anything to fallen angels. The fallen angels God has bound in Tartarus or hell, would not receive any attention from our Lord and Savior. He will deal with them when He throws them into the lake of fire at judgment day.

God’s concern is always for mankind, and never refers to His concern for angels. His preaching or “proclaiming” His victory would be more importantly directed to the people who rejected Him because He gave them 120 years to repent. Since Noah was faithful and preached to those unbelieving people for 120 years, and no one believed him, Jesus may have wanted them to see firsthand that Noah was right. This is only my opinion based upon my research.

The third view is that they were all those who were saved up until Christ’s resurrection. The problem with this view could be in associating the word “prison” with the word “paradise.”

All those who died in the Lord in the Old Testament were in Abraham’s bosom, which is actually called paradise (Luke 23:43). It would be inaccurate to refer to them being in a prison, since they were comforted, as the Bible says in Luke 16:25.

To believe in either view is acceptable, since it does not fall under a doctrinal issue. Whatever view you hold may be just as valid as mine, or another. Part of the fun and challenge of the Bible is delving into some of the more difficult verses, and possibly finding some detail or an answer, or a revelation of God’s thinking. I hope this brings you some clarity on the subject.