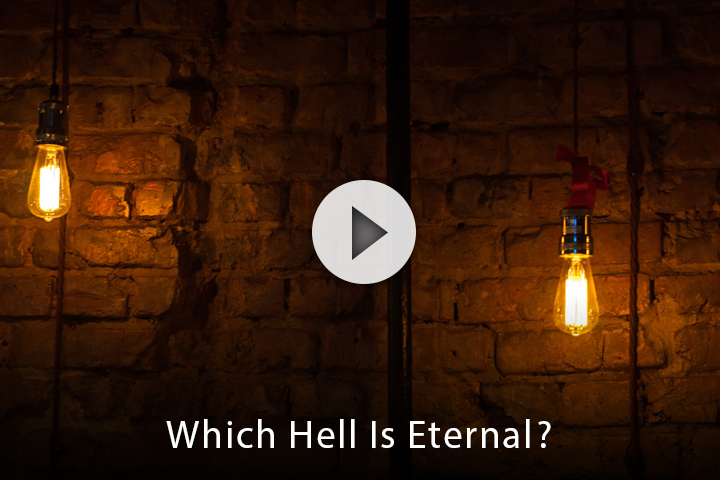 “How can hell be eternal when those in hell will be released and stand before God and be judged?”

First of all, their release may only be seconds, and that would not be a legitimate argument against an eternal hell.  To go a step further, there are two hells, and only one hell is eternal. Only the future hell called “Gehenna” or “the lake of fire,” is eternal, and it is mentioned in Revelation 19:20; 20:10, 14-15; 21:8.

The word “Eternal” is only used in the verses that refer to the future hell. The word “Gehenna” (the future hell) is used 11 times by Jesus, and one time by James.

The current hell is called “hades.” Hades is the Greek word and “Sheol” is the Hebrew word. It is a temporal place of torment and fire and it will be delivered up and cast into the Lake of Fire at the Judgment Day mentioned in Revelation 20:12-15.  Hades is where those who deny Jesus are being held currently.

Those in the current hell are then delivered up to the Great White Throne Judgment. At that time they will be judged and then assigned their portion in the lake of fire. Again, the period of time that they are released may only be seconds. When people’s lives flash before their eyes, when they are near death, it happens in seconds.

These next verses use the word “Eternal” or the phrase, “to be cast into unquenchable fire” or, “forever and ever,” only referring to the future hell.

These next verses refer to the current hell, or hades.

Notice there is no mention of hell being eternal. This is because it refers to the current hell, or hades. Also notice it says, “to the end of this age.” The age it is referring to is the time up until the Great White Throne Judgment. After that, it will be a different age, a new heaven, and a new earth. It will also be the time of the future hell (the lake of fire) which is the eternal location of hell.

To continue with scripture:

The word “eternal” was not used in any of those verses as these verses refer to Sheol or Hades.

This next verse describes when the current hell is cast into the lake of fire, or Gehenna.

There is no discrepancy in the Bible. There is a temporary hell and there is a permanent hell.

You might look at it this way: If a person commits a crime, they are first placed in a local jail. They await a trial date and if found guilty, they are sentenced to a state prison. Hades is similar to the local jail where Gehenna, or the lake of fire, is like the state prison.

The Bible never contradicts itself. It is only in our ignorance that we falsely accuse the word of God.  In 2 Timothy 3:16 it states, “All scripture is given by inspiration of God…”

There are no mistakes in God’s word.