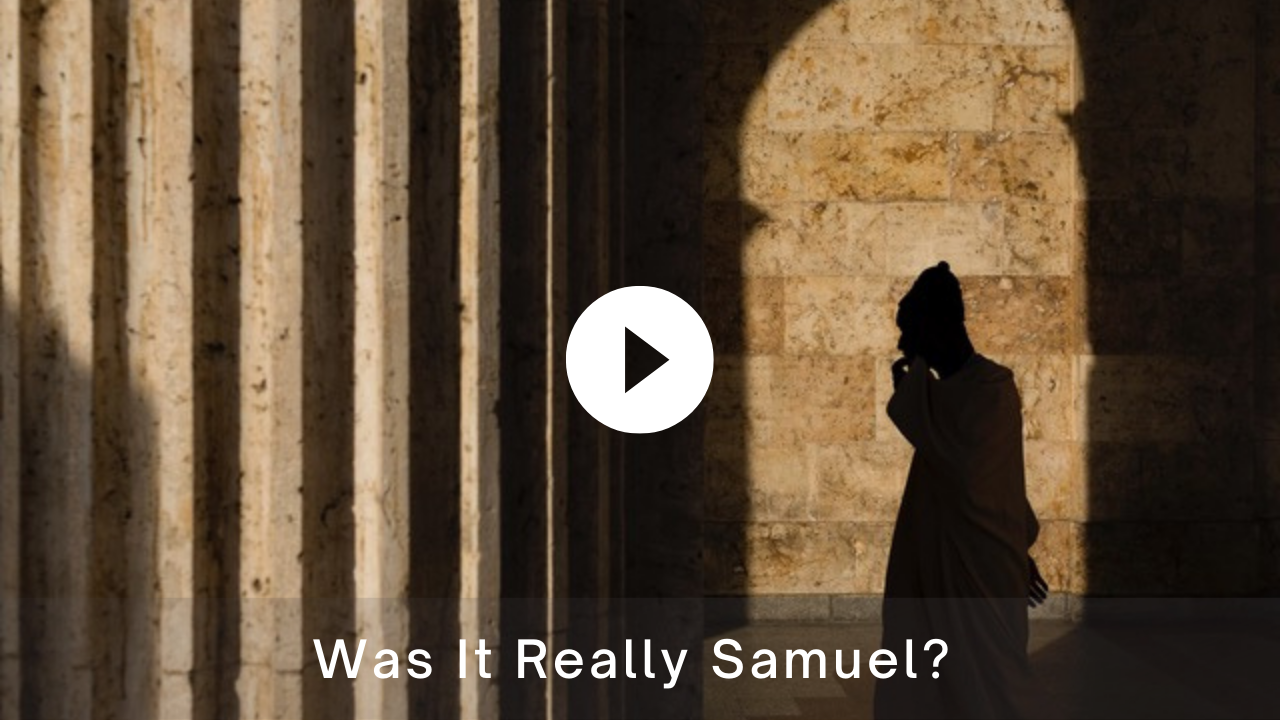 From 1 Samuel Chapter 28: King Saul inquired of God for advice…but God did not answer him because of his disobedience. King Saul then went to the witch of Endor to bring back the prophet Samuel from the dead even though this practice was forbidden by God. Was it Samuel who appeared to him…or was it an evil spirit?

I believe the scripture is clear that it was Samuel that ascended out of the earth to talk with King Saul. There are seven reasons that make this clear.

First, the witch was surprised and startled to the point of fear. Scripture says, “And when the woman saw Samuel, she cried with a loud voice.” It says she saw Samuel, not an evil spirit. She would not have been shocked and scared if were an evil spirit. She had seen evil spirits before, since this was her practice. She knew she could not have actually brought up the real Samuel, but only an impersonating demon (familiar spirit). In addition, seeing the real Samuel caused her to know that it was Saul asking. She said, “Why hast thou deceived me? For thou art Saul.” She would have known that Samuel was frequently with Saul, as the prophets had audience with the King. She immediately associated the two identities.

The second reason is that Samuel’s appearance was before the witch had started her ritual, or incantations. God interrupted it immediately. Bringing up Samuel was allowed and caused by God, as several commentaries point out; Since this was the king, and it involved the Nation of Israel, God made this exception. God made exceptions before in the Bible. One example is He allowed Samson to marry a Philistine in Jude 14:4, which was not permitted for an Israelite (Ex. 34:16; Dt. 7:1-6; Joshua 23:12-13.

The reason some believe it was an evil spirit and not Samuel is because God’s word in Dt. 18:10 forbids anyone to seek out a witch. However God didn’t use the witch; he bypassed her. God did not violate His word. She never did her incantations. She had no part in the conversation between Samuel and Saul, and no part in this encounter whatsoever.

The third reason is the witch described Samuel’s appearance as, “an old man coming up; and covered with a mantle.” Samuel would have in fact been old, and Samuel wore a mantle as a Prophet would (1 Sam. 15:27).

The fourth reason is found in verse 14, which states that Saul perceived it was Samuel. Some today give their opinion and conclusion that it was not Samuel. I’m sure Saul would have a more accurate sense then we, since he was an eye-witness! He perceived it to be Samuel. In addition, in verse 14 it says that Saul, “stooped with his face towards the ground, and bowed himself in respect and reverence.” He must have been strongly convinced it was Samuel for the king to bow down. Young’s Literal Translation, which is the most accurate, states that Saul knew that he (is) Samuel. Notice it says, “He is Samuel” and not “he perceived that he was.”

The fifth reason is the most important point. In verses 15 and 16, twice it states, “and Samuel said.” If it were an evil spirit, the scripture would not have said it was Samuel. The Bible answers this question for us. God’s Word says what it means.

The sixth reason is that Samuel prophesied the future in detail, which the evil spirit could not do. The devil does not know the future. 1 Sam. 28:16-19, “Then Samuel said, ‘So why do you ask me, seeing the Lord has departed from you and has become your enemy?  And the Lord has done for Himself as He spoke by me. For the Lord has torn the kingdom out of your hand and given it to your neighbor, David.  Because you did not obey the voice of the Lord nor execute His fierce wrath upon Amalek, therefore the Lord has done this thing to you this day. Moreover the Lord will also deliver Israel with you into the hand of the Philistines. And tomorrow you and your sons will be with me. The Lord will also deliver the army of Israel into the hand of the Philistines.”

If it was an evil spirit, the spirit would not have chastised Saul’s disobedience to God, and more importantly, could not have so accurately, and with such detail, predicted the future.

There are many commentaries that support this scenario. Unger’s Commentary on the Old Testament, pg. 405-406 says, “The sudden and totally unexpected appearance of the spirit of Samuel. Transfixed with terror, the woman screamed out with shock as she perceived that God had stepped in. By God’s power and special permission, Samuel’s actual spirit was presented to pronounce final doom upon Saul… After death he [Samuel] prophesied and showed the king his latter end…The women’s divining demon had nothing whatsoever to do with Samuel’s sudden appearance.  She and her spirit accomplice were completely side-tracked. God stepped in and brought up Samuel, who pronounced doom upon Saul… Saul seemed to have glimpsed the spirit of Samuel also, for he bowed with his face to the ground and did obeisance… Samuel’s pointed and stinging rebuke to Saul is added evidence that his spirit had actually appeared and that it was not an impersonating demon.”

That sums it up clearly. Again, and most importantly,  four times the scripture says it was Samuel. This is not a doctrinal issue, so it is not crucial to believe one way or the other. However, if we respect the Scripture and take it literally, it avoids confusion, and leaves no doubt that it was in fact, Samuel.