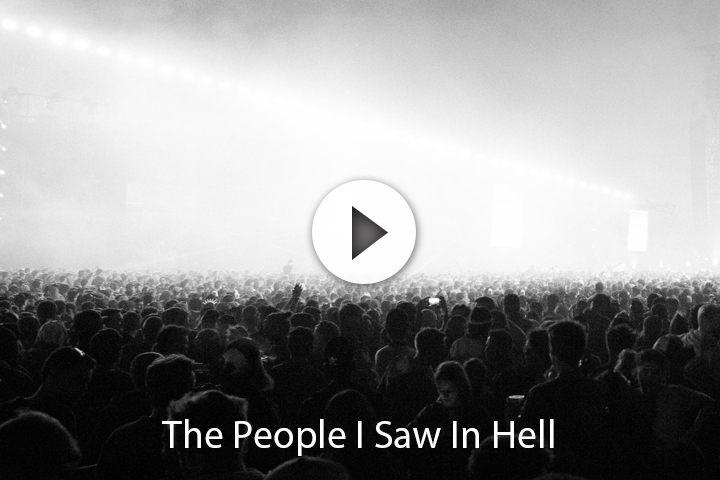 The People I Saw In Hell

In 1998 God gave me a life changing vision of hell. I receive so many questions about my experience from people all over the world.  One of the things that I’m often asked is, “Who did you see in hell?”

I know there are others who say they’ve had a similar experience and go on to mention specific people they saw in hell. Some say they saw children and some say they encountered celebrities. Some also share that they observed Christians who didn’t tithe, or women who wore jewelry or colored their hair. I saw none of this.

In fact, none of those claims could be true because none of them are biblically accurate. People go to hell only because they reject the saving name of Jesus Christ. Choosing not to tithe will not send a person to hell. Jewelry, hair, make-up or any type of clothing will not send a person to hell. These outward acts are not the reason people go to hell.

The people I observed in hell looked like skeletons. They were nameless and faceless.

I didn’t know their history, their politics, or their skin color. I did not know if they were someone famous, or a beggar from the streets. No matter who they were, it didn’t matter. Each of them was truly alone amidst a sea of tormented souls. They have no purpose, no identity, and they are forgotten.

During my time in hell, I could see the outlines of people through the flames. From the outlines I saw that they seemed to be fully-grown or adult in size. In addition, the screams I heard were not the screams of children; they were mature voices. I will say that I also had an impression, an unexplainable internal feeling, that there were no children there.

The questions I receive about who I saw in hell are so much less important than how these tormented souls ended up there.

As I look back on my experience, I’m reminded of the devastation of the twin towers of the World Trade Center on September 11, 2001. Rather than face the 2,000-degree heat, some people chose to plummet to their death by leaping out of a window. Those people chose to fall to their death rather than face the intensity of the flames for even fifteen seconds. According to the Bible, hell is deep down in the earth and scientists say it is 12,000 degrees. Try to imagine this state of existence for those in hell, and the fear that never ceases for even one second. This isn’t just for 15 seconds, but for all eternity and there is no way to escape it. To witness people in terror, in desperation, and in unending torment was more than I could bear.