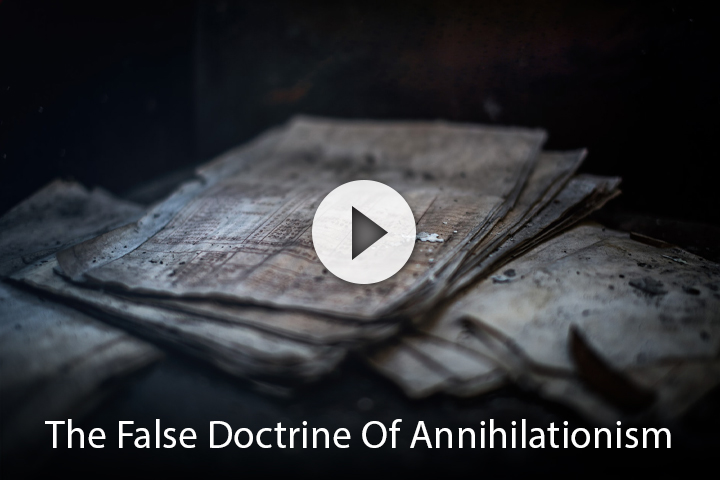 The False Doctrine of Annihilationism

Dr. Christopher W. Morgan in the book, Hell Under Fire, page 196 writes, “Annihilationism is the belief that those who die apart from saving faith in Jesus Christ will be ultimately destroyed. Thus, the annihilationist rejects the historic view of hell as conscious, endless punishment.”

There are many biblical reasons why Annihilationism is false. First, God made us in His image. We are eternal beings according to Genesis 1:26. God is eternal, and so are we.

·      Isaiah 38:17 says, “But You have lovingly delivered my soul from the pit of corruption.”  To be delivered would mean a person would still exist.

·      Isaiah 38:18 says, “Those who go down to the pit cannot hope for thy truth.”  This presupposes their existence. You wouldn’t say they cannot hope, if they didn’t exist.

·      Job 15:30 says, “he shall not depart out of darkness.” To not depart would mean they are held captive and cannot leave. They still exist.

In Luke 16, Jesus mentioned the rich man in hell in torment in the flame. The rich man was also concerned for his 5 brothers who he didn’t want to come there. Obviously, he still existed, and had concern for his brothers coming there. There is no way the annihilationist can twist this verse. It was not just a parable.

Jesus also said in Matthew 13:50, “cast them into a furnace of fire, there shall be weeping and gnashing of teeth.” A person has to still exist to weep and gnash their teeth.

Jesus said in Matthew 23:15, “You make him two fold more the child of hell than yourselves.” To be a child of hell a person has to still exist, and be in hell. He also said about Judas, in Matthew 26:24, “It had been good for the man if he had not been born.”  If Judas was simply annihilated, like supposedly everyone else, then why make that distinction about him being born?

Jesus said in Matthew 18:6, “But whoever causes one of these little ones who believe in me to sin, it would be BETTER for him if a millstone were hung around his neck, and he were drowned in the depth of the sea.” That indicates there is something coming for this person that is worse than drowning or worse than physical death.

In Mark 3:29 Jesus said, “eternal damnation.” The word “Damnation” means “punishment.”  You have to still exist to be punished eternally.  Matthew 10:28 says, “And fear not them that kill the body, but are not able to kill the soul: but rather fear Him which is able to destroy both soul and body in hell.”

Annihilationists state that the word “destroy” means annihilate. However, that is not true. Thayer’s Greek lexicon states that the word is “apollumi,” and means, “To be delivered up to eternal ruination.”  Vine’s, pg. 164 says, “not the loss of being, but the loss of well being.”  Strong’s says, “to kill, and carries with it the root meaning, “to ruin.”
Some scholars point out that the word for annihilate in the Greek, is the word “Ekmidenizo” and is not found in the New Testament.  Another proof verse is in 2 Thessalonians 1:8-9 where it says, “them…that obey not the gospel…shall be punished with everlasting destruction from the presence of the Lord…” The destruction is everlasting, or the ruination of the person, and in addition, they are “from the presence of the Lord.” A person must exist to be from, or away from someone.
2 Corinthians 4:18 also proves that the word “eternal” mentioned in that verse is used to show the antithesis of the word “temporal,” also stated in that verse, just as things “seen” and “not seen” are opposites.

One last point:  Why are there several verses about the degrees of punishment in hell such as in Matthew 23:14, Matthew 10:15; Luke 12:46-47; and Hebrews 10:28? How can there exist a “worse punishment” and “degrees of annihilation?” How can one be beaten with many stripes, or beaten with few, at the same time as being wiped from existence, as they say?

Ask yourself the question, “If there is no hell, then there would be no justice served to the murderers, child abusers, and the Hitler’s of the world?” Would that be fair and just? Annihilationism is contrary to clear Biblical teachings. Some want to soften God’s judgments, and compromise God’s Word in order to seem more socially acceptable. However, Jesus warned about hell in 46 separate verses. Why?  Because hell truly exists and it is the terrifying place that He saved us from. Only those who trust in Him as their Lord and Savior will be saved from it. To believe in Annihilationism is to call Jesus a liar. He said it is eternal and he personally described the rich man’s torment in the flame. How do you think calling Him a liar will go over on Judgment Day?