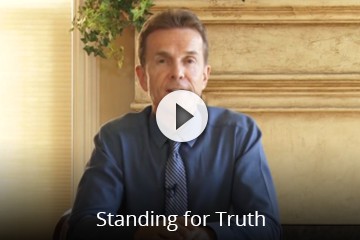 During my career in real estate, I received a phone call from one particular owner in the neighborhood where I sold homes. He wanted to interview me, along with a couple of other agents to list his home. He was the owner of a very large construction company in California.

During the listing appointment, he began to ask me questions about the Bible. He was not a Christian and I could quickly see that his questions were meant to antagonize me. He said, “You know the Bible’s all wrong. It’s full of lies and it’s not proven.” I decided to stand up to him and I said, “You’re mistaken.” I began to refute his points. This went on for about two hours. We did not even discuss the property. During this time, I became fairly certain I would not get the listing. I was going against everything he believed. I wasn’t being condescending. I was just confident of my viewpoint and I had the facts to back it.

To my surprise, after the two hours he said, “Bill Wiese, you’ve got the listing,” He went on to say, “You stood up to me and you came back with a pretty good argument. It’s pretty convincing.” He said, “You didn’t back down. If you’ll be that determined when it comes to selling my house then I know you’ll be able to obtain a buyer for my property. You weren’t worried about whether you got the listing or not. You were honest and you stood up for your principles so I trust you. I want you to list the house.”

Proverbs 28:23 says, “He that rebukes a man, afterwards will find more favor than he that flatters with the tongue.” I didn’t rebuke him, but I stood up to him and challenged his beliefs. He admitted that he was swayed by our conversation and starting to believe what I had shared about the Bible. I ended up listing the home and selling the property. I also made a bit more headway getting to know him during the selling process. The point is, stand strong to your convictions. Don’t back off. Be honest with people and you’ll find favor with God and with man.