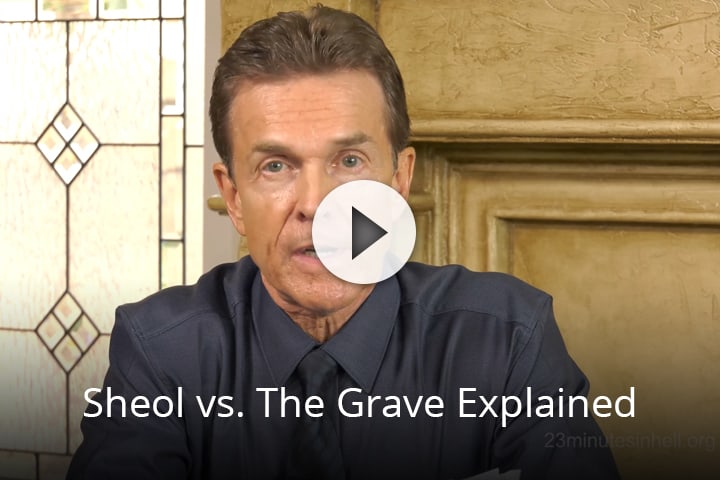 We hear from many people who are confused about the use of the word “grave” in the King James Version of the Bible. They state that the word “grave” never refers to hell or Hades. What they do not realize is that there are two prominent words in the Hebrew for the word “grave.”

One is the word “qeber” which means a burial site.

The other is the word “Sheol.” Sheol never denotes just the grave. It always refers to hell or Hades, which is the Greek word for the current hell.

In some instances, Sheol may include the grave but never just the grave. Sheol is always referred to as Hades. The verses I reference for hell contain the word “Sheol” in the Hebrew.

The Vine’s Expository Dictionary, page 286 and page 300 state, “Hades corresponds to Sheol. It never denotes the grave. The King James Version wrongly rendered it the grave. Dr. Chuck Missler, in his newsletter dated November 2003 said, “The Hebrew Sheol and the Greek Hades are not the grave. The grave is where the body goes. Sheol and Hades is where the departed spirits go.” In the book Hell Under Fire, page 44, it is pointed out that the actual word for grave is the word “qeber,” which is a burial site. That word is used in Genesis 23:4, 1 Kings 13:30, 2 Samuel 3:32, 2 Chronicles 34:28, Numbers 19:16, Job 5:26 and many others. In those instances, it’s clear it’s referring to a burial site, but in others it is referring to hell.

Nelson’s New Illustrated Bible Dictionary, page 996 and page 1,164 says, “In Old Testament, thought the abode of the dead, Sheol, is the Hebrew equivalent of the Greek Hades, which means the unseen world.” Sheol was regarded as an underground region, as a deep underground place. The pit became synonymous with Sheol, the abode of the dead, the netherworld of departed spirits.”

The New Bible Dictionary, page 1,092 says, “Sheol was below the surface of the earth. Hades is therefore the New Testament equivalent of Sheol.” The life of Christ states the Old Testament uses of Sheol to describe the abode of the dead and divides it into two parts as the righteous go there and the unrighteous.

Dr. Erwin Lutzer in his book, One Minute After You Die page 31-35, says, “We’ve learned that the Hebrew word for Sheol is used for the realm of the dead in the Old Testament. Sheol is always translated Hades. They are one and the same. That the word ‘Sheol’ refers to the realm of departed spirits seems unmistakable. Just like Sheol, the word ‘Hades’ is never used of the grave but always refers to the world of departed spirits.”

From the Moody Handbook of Theology, page 393, “The New Testament term used to describe the afterlife is Hades and is the equivalent to the Hebrew term “Sheol.”

Unger’s Commentary, page 765, “The pit is synonymous for Sheol.”

The Believer’s Bible Commentary, page 1,433, “Hades is the Greek for the Old Testament word ‘Sheol,’ the state of departed spirits. In the Old Testament period, it was spoken of as the abode of both saved and unsaved.”

The Dictionary of Biblical Imagery, page 198 and 647 says, “An inescapable underworld prison. The Old Testament pictures the realm of death or Sheol as being under the earth. Like a pit that represents it, is pictured as dark and deep.”

The Great Doctrines of the Bible, page 296 says, “Sheol and Hades are identical. It has gates and bars.”

Holman’s Illustrated Bible Dictionary, page 1,482 says, “In a number of texts, persons are spoken of as descending to Sheol or going into the pit. This likely indicates that the Hebrew saw Sheol as something beneath their feet.”

The following are verses from the King James Bible, using the word “grave.” However, in the Hebrew, it is the word “Sheol.”

Isaiah 14:11 says, “Thy pomp is brought down to the grave.” This verse is talking about the king of Babylon and actually Lucifer. The Amplified Bible says, “Brought down to Sheol, the underworld.” It is not just referring to the grave.

Believer’s Bible, page 950 says, “Sheol’s inhabitants are there to greet him.” Again, this is not referring to the grave. Matthew Henry’s Commentary, page 1,106 says, “There is an invisible world, a world of spirits to which the soul of men removed at death and which they exist and act in a state of separation from the body.”

Psalms 30:2 says, “Thou hast brought up my soul from the grave.” It is the word “Sheol” again. Unger’s Commentary, page 788 says, “Was brought up from Sheol, the netherworld. He did not go down to the pit, the infernal regions.” The Believer’s Bible, page 589 says, “A narrow escape from the dissolution of Sheol.”

Psalms 31:17 says, “Let them be silent in the grave,” or Sheol. Believer’s Bible, page 593 says, “The ones who are put to shame, who goes speechless to Sheol.” Again, it is not just referring to the grave. It’s Sheol or hell, the underworld.

Psalm 49:15 says, “God will redeem my soul from the power of the grave.” Again the word “Sheol” is used. Believer’s Bible, page 627 says, “God will deliver his soul from the disembodied state.” Matthew Henry’s Commentary, page 814 says, “From the Sheol of hell, the wrath to come, the pit, the destruction unto which wicked shall be cast.”

Ezekiel 31:15, “In the day when he went down to the grave.” Again the word “Sheol” is used. Believer’s Bible, page 1,059, “The Assyrian was dashed down to hell.” Matthew Henry’s Commentary, page 1,400, “Go down to the grave to the nether parts of the earth. They were called away with those who go down to the pit.” The Expositor’s Study Bible, page 1,430 states, “Does not refer to the bearing of the body in a grave but refers to Sheol. This is the place of departed spirits who are in hell.”

Psalms 31:17 says, “Let the wicked be ashamed, and let them be silent in the grave.” Again, speaking of Sheol. Matthew Henry’s Commentary, page 670, “We are at once to be removed to another world, the netherworld.”

Job 7:9, “He that goes down to the grave,” or Sheol, “shall come up no more.” Unger’s Commentary, page 688, “He would go to the place of the dead, the unseen world.” Nelson’s, page 622 says, “A place from which one would never return, a meeting house in the underworld.” Jamieson-Fausset-Brown’s Commentary, page 370 says, “Sheol, a place of departed spirits.” Genesis 37:35 says, “I will go down to the grave unto my son mourning.” Jamieson-Fausset-Brown, again page 43 says, “The unknown place of departed souls.”

Isaiah 38:18 says, “For the grave cannot praise thee, they that go down to the pit cannot hope for thy truth.” The word “grave” again is the word “Sheol.” Matthew Henry’s Commentary, page 1,148 says, “The Sheol, the Hades, the invisible world.” Jamieson-Fausset-Brown, page 556 says, “Hades and its inhabitants.”

Proverbs 23:14 says, “Thou shalt beat him with the rod, and deliver his soul from hell,” or Sheol. That’s talking about disciplining a child so he can avoid going to hell. Of course it wouldn’t be referring to a grave because you can’t redeem your child from going to a grave. He’s talking about hell. Also the word “beat” is actually the word “strike” or “smote.” It’s not referring to child abuse.

Psalms 55:15 says, “And let them go down quick into hell.” David is talking about his enemies. Matthew Henry’s Commentary, page 822 says, “The souls of impenitent sinners go down quickly or alive into hell, the utter final and everlasting ruin.”

Proverbs 27:20, “Hell and destruction are never full.” Obviously it’s not talking about the grave. It’s talking about hell. Again it’s the word “Sheol.”

Job 26:6, “Hell is naked before him, and destruction has no covering.” It all ties hell with destruction. It’s not the grave.

Numbers 16:32-33 says, “And the earth opened her mouth, and swallowed them up alive, and all their houses, and all the men that appertained unto them, and went down alive into Sheol.” That’s obviously not talking about these people in their houses going into a grave.

And Psalms 116:3 “The pains of hell (or “Sheol”) got hold upon me. I found trouble and sorrow.” That’s obviously talking about hell, not the grave.