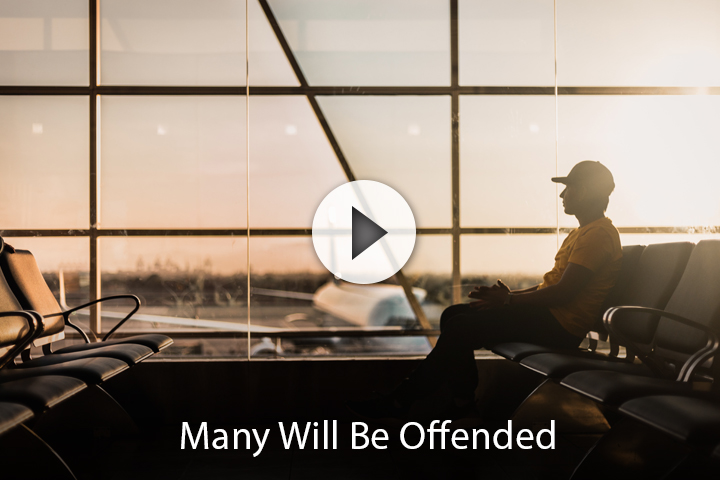 Many Will Be Offended

Regarding the last days, Jesus said in Matthew 24:10, “And then many will be offended, will betray one another, and will hate one another.”

Now more than ever, we must guard ourselves from offense. As Christians, we must grow to the point that we can shake off offense quickly. Listen to these verses:

Psalm 119:165, Great peace have they that love thy law:  and nothing shall offend them.

Luke 7:23, Jesus said, And blessed is he, whosoever shall not be offended in me.

Mark 4:17, Jesus again said, When affliction and  persecution arises for the word sake, immediately they are offended.

John 16:1, These things have I spoken unto you, that ye should not be offended. He was letting His Apostles know they will be hated for the Gospel sake.

Jesus said many are offended when they are confronted with the Word of God. Why? It confronts them in their sin. Read how Jesus confronted the religious leaders of their sin.

Mark 11:15, And Jesus went into the temple, and began to cast out them that sold and bought in the temple.

Matthew 21:12, And overthrew the tables of the moneychangers.

John 2:15, And when he had made a scourge of small cords, he he drove them all out of the temple, he poured out their money. He said they made the temple a den of thieves.

He overturned their tables, scattered their money, made a whip, and drove them out. He called them thieves. Jesus was perfectly just in what he did. However today, confronting sin may be considered offensive or hateful.

Matthew 15:26, It is not meet to take the children’s bread, and cast it to the dogs.

The woman asked for her daughter to be delivered from demons, but she was a Gentile. Jesus said that the blessings were only for the Jews, and called her a dog. He didn’t imply she was less of a human being by calling her a dog.  A Gentile was referred to as a dog, or a people outside of God’s covenant, and could not be part of God’s blessings. However, she was persistent and displayed faith, and was not offended by him calling her a dog. He then delivered her daughter from demons. Today, most would say Jesus was prejudice, verbally abusive, and extremely offensive.

Jesus said, in speaking to his disciples, that everyone is evil. How would that go over in today’s culture? Jesus would be cancelled.

Jesus said this to Peter. Jesus was actually speaking to the demonic spirit that influenced Peter. But can you imagine today calling someone Satan!

Matthew 23:13, Jesus was talking to the highest religious leaders of his day. He said, “Woe to you, hypocrites, you shut up the kingdom of heaven against men; for ye neither go in yourselves, neither suffer ye them that are entering to go in…ye devour widows houses…you blind guides, you strain at a gnat and swallow a camel, hypocrites, full of extortion and excess, for you are like unto whited Sepulchres, full of dead men’s bones.” How would that go over today in addressing the greatest religious leaders?

John 8:44, Jesus again talking to the religious leaders. Ye are of your father the devil. Telling someone that their father is the devil would be taken offensively. Was Jesus concerned about that? No!

Matthew 25:26, You wicked and slothful servant. Cast ye the unprofitable servant and cast him into outer darkness, there shall be weeping and gnashing of teeth. Speaking of the person who didn’t invest.

Luke 19:27, But those mine enemies which would not that I should reign over them , bring hither, and slay them before me. The scripture of the man who buried his talent.

Matthew 19:4, He which made them at the beginning made them male and female. Did Jesus speak the truth?

Mark 6:3, Is this not the carpenters so?…So they were offended at Him. Their attitude was, “Who does he think he is?”

Matthew 15:12, Then his disciples came and said to him, “Do you know that the Pharisees were offended when they heard this saying? Jesus called them hypocrites.

Matthew 23:33, Ye serpents, ye generation of vipers, how can you escape the damnation of hell? How would it go over today calling someone a snake and telling them they are going to hell forever?

The scriptures reveal that Jesus was not politically correct. We also should not be concerned if people are offended by the Word of God when we present it to them. We need to share the truth with others, in a loving, non-condescending way, but never compromise the truth. The Word of God does offend the sinner. It is meant to convict them in order to produce repentance so they turn to God through Jesus Christ.

As believers, may we mature to the point that we will receive correction and even rebuke from God when needed. The Lord Jesus loves each one of us deeply. His Spirit is there to help us stay on course and finish our race.