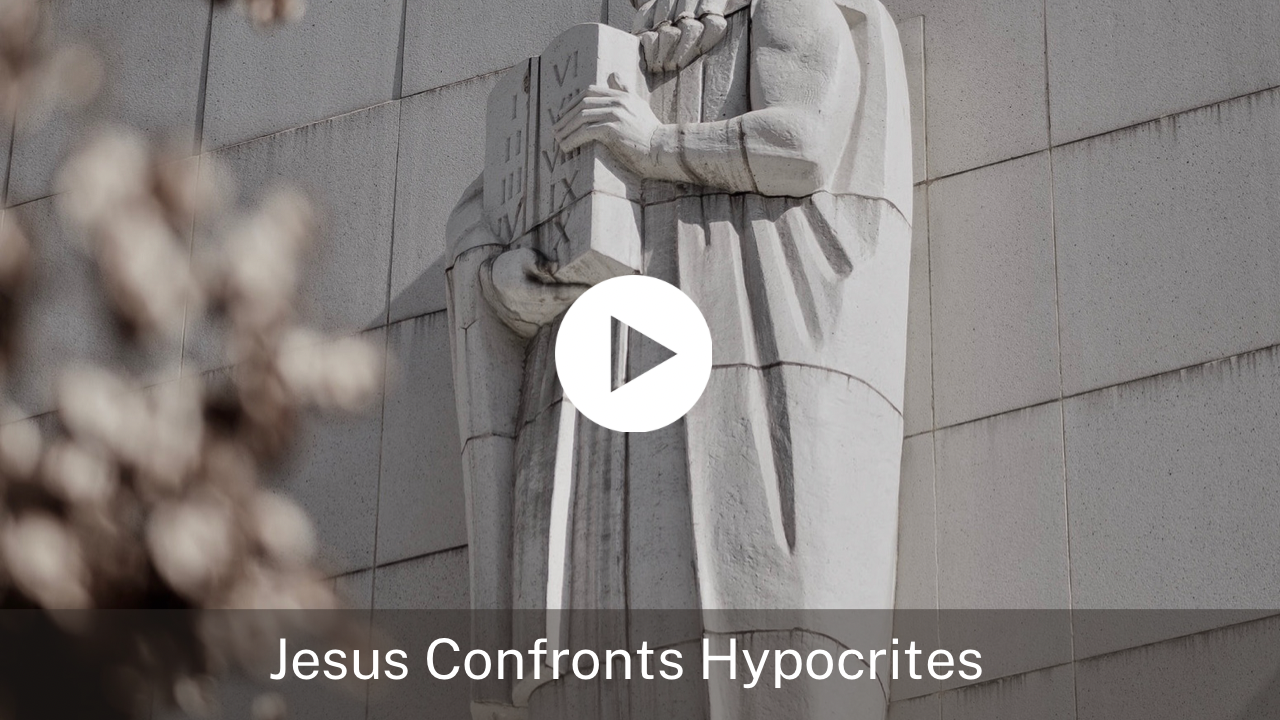 Jesus often confronted the religious hypocrites of His day. He said some things to the Pharisees that they understood…but we might not understand today because we may not be familiar with their culture and rituals. Let’s take a look at a few of these verses.

“Some Pharisees and teachers of religious law now arrived from Jerusalem to see Jesus. They asked him, “Why do your disciples disobey our age-old tradition? For they ignore our tradition of ceremonial hand washing before they eat.”

Jesus replied, “And why do you, by your traditions, violate the direct commandments of God? For instance, God says, ‘Honor your father and mother, and ‘Anyone who speaks disrespectfully of father or mother must be put to death.’But you say it is all right for people to say to their parents, ‘Sorry, I can’t help you. For I have vowed to give to God what I would have given to you.’ In this way, you say they don’t need to honor their parents.  And so you cancel the word of God for the sake of your own tradition. You hypocrites!”

Jesus brought up the law of honoring your parents, which God instructed us to do in Exodus 20:12; 21:17 and Deuteronomy 5:16.  The Pharisees had schemed with the priests to be exempt from doing so.

The Expositor’s Study Bible, pg. 1676, They “dedicate their estate to the Temple so that they wouldn’t have to take care of their aged parents, and a crooked priest would then give it back to them, after taking a percentage.”

Believers Bible Commentary, pg. 1263, “The Lord Jesus reminded his critics that they transgressed the commandment of God, not simply the tradition of the elders. The law commanded men to honor their parents, including supporting them financially if necessary.”

How wicked of them to appear pious in their position of religious authority, and yet be so low as to devise a plan to avoid taking care of their own parents.

To address the Pharisees comment that the apostles were breaking the tradition of washing their hands before eating, MacArthur Bible Commentary, pg. 1151 says, “The law of Moses contained no commandment about washing one’s hands before eating, except for priests, who were required to wash before eating holy offerings…”

Another incident Jesus encounters with the Pharisees is found in Matthew chapter 23 where Jesus points out eight woes about the Pharisees. These are not curses, but sorrows of their condition and their fate. We will only look at two of these woes.

In Matthew 23:14, “Woe to you, scribes and Pharisees, hypocrites! For you devour widows’ houses, and for a pretense make long prayers. Therefore you will receive greater damnation.”

The question is how did they devour widows houses, and why the long prayers?

MacArthur Bible Commentary pg. 1243, “Scribes often served as estate planners for widows, which gave them the opportunity to convince distraught widows that they would be serving God by supporting the temple or the Scribes own holy work. In any case, the Scribes benefited monetarily and effectively robbed the widow of her husband’s legacy to her. The Pharisees attempted to flaunt their piety by praying for long periods. Their motive was not devotional to God, but a desire to be revered by the people.”

Here are a few verses about how we are to treat the widows:

Deuteronomy 27:19,  Cursed is anyone who denies justice to widows’

Exodus 22:2, Ye shall not afflict any widow

Jesus didn’t hesitate to confront them on their wickedness.

In Matthew 23:27-28, “Woe to you, scribes and Pharisees, hypocrites! For you are like whitewashed tombs, which indeed appear beautiful outwardly, but inside are full of dead men’s bones and all uncleanness. Even so you also outwardly appear righteous to men, but inside you are full of hypocrisy and lawlessness.”

The question is why were tombs whitewashed?

Believer’s Bible Commentary, pg. 1290, “Tombs were whitewashed so that Jewish people would not inadvertently touch them and thus be ceremonially defiled. Jesus likened the scribes and Pharisees to whitewashed tombs, which looked clean on the outside, but were full of corruption on the inside. Men thought that contact with these religious leaders would be sanctifying, but actually it was a defiling experience because they were full of hypocrisy and iniquity.”

Jesus confronted their externalism. They conceal their hypocrisy and lawlessness. Inside, they were dead and rotting like a corpse.

We can see the wisdom of Jesus, as He knew their hearts and evil agenda. They continually tried to trap Jesus in His words. How foolish to try and outsmart God.

Jesus gave the law to the proud and arrogant, and held them accountable, but He showed grace and forgiveness to the humble. The God we serve is a God of extreme love, but He is also a God of justice and judgment. May we learn to have a reverence for Almighty God to the point of obeying Him.