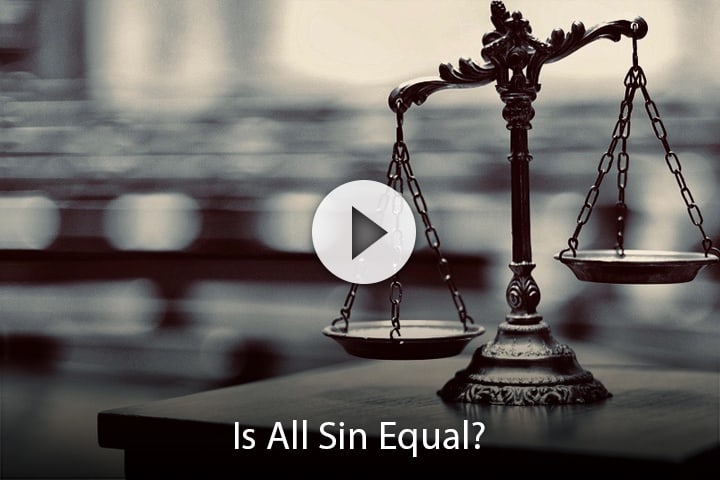 Have you ever heard a person say, “God sees all sin the same. One sin is not worse than another?” We have all heard that before, but did you know that it’s not true? There is a sin that is greater in degree of wickedness therefore it deserves a greater punishment. Think of someone like Hitler versus a common thief. Would you agree that Hitler would be deserving of a much greater punishment if there were any justice?

Regarding degrees of punishment, in John 19:10-11, Pilot said to Jesus, “Will you not speak to me? Do you not know that I have power to crucify you and I have power to release you?” Jesus answered, “You could have no power at all against me except it were given thee from above. Therefore, he that delivered me to you has the greater sin.”

Even though Pilot could have Jesus killed, the one who delivered Jesus to Pilot was guilty of a greater sin. That statement infers a lesser sin. In Matthew 23:14, Jesus said, “You shall receive the greater damnation.” Again, that infers a lesser damnation. In the book of Systematic Theology, page 1143 states, “He implies that there will be degrees of punishment.” In Matthew 10:15, Jesus again said, “It shall be more tolerable for Sodom and Gomorrah in the Day of judgment than for that city.” That also infers a less tolerable. Hebrews 10:29 says, “Of how much worse of a punishment.”

In Genesis 18:20, it says, “Because their sin is very grievous.” Notice the adjective “very.” Proverbs 6:16-17 says, “These six things does the Lord hate. Yea seven are an abomination unto him.” Nelson’s Bible Commentary, page 751 says, “The word “hate” progresses to abomination.” In other words, it progresses to a worse sin. In Luke 12:46- 48, it mentions a servant beaten with many stripes or beaten with few depending on the severity of the sin. Matthew 12:45 says, “And the last state of the man is worse than the first. Even so shall it be with this generation.” That indicates a more severe punishment for that generation because they saw Jesus and His miracles and many still denied Him.

In 2 Corinthians 11:15, it says, “Whose end shall be according to their works.” People are judged according to their works. Matthew 7:3 says, “And why do you see the mote that is in thy brother’s eye, but consider not the beam that is in thine own eye?” That indicates degrees of fault. The Bible makes it clear that God does not view all sin the same.

To be clear: a person is not saved because they sin less than someone else. We are only saved by grace through faith in Jesus Christ. Because God loves us, He sent Jesus to die in our place for our sins and He rose from the dead. Jesus said in John 14:6, “I am the way, the truth and the life, and no man comes unto the Father, but by me.” It’s not our sin that sends us to hell. It’s the rejection of the provision for our sins that condemns a person to hell. It is a person’s own choosing. Jesus said in Matthew 12:37, “By thy words, thou shall be justified, and by thy words, thou shall be condemned.”

Thankfully, believers know if we confess our sins, He is faithful and just to forgive us our sins and to cleanse us from all unrighteousness (1 John 1:9).