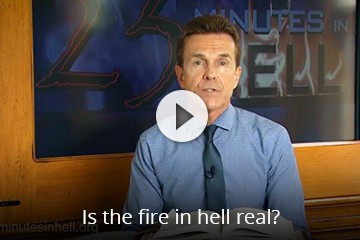 If the fire in hell is only metaphorical, then why did Jesus state in Luke 16 that the rich man wanted a drop of water to cool his tongue, as he was in tormented in the flame?  If it were only flames of mental anguish as some say, then why would water suffice?

In John 15:6, why did Jesus compare men being gathered, just as branches that are withered, and are thrown into the fire and burned?  If the comparison really didn’t mean actual burning, then why use burning in the first place?

In Matthew 13:3, why did Jesus compare men being bound in bundles to be burned just as tares are burned?

Why did God Himself say in Deut. 32:22 “For a fire is kindled in mine anger and shall burn unto the lowest hell…”

Job said in Job 18:15, “Brimstone shall be scattered upon his habitation.”

David said in Ps.11:6, “Upon the wicked he shall rain snares, fire and brimstone…”

Zech 3:2 states “Is not this a brand plucked out of the fire.”

Matthew 3:12 quoted John the Baptist saying, “he will burn up the chaff with unquenchable fire.”

Jude said in Jude 7, “suffering the vengeance of eternal fire.”

In Rev. 21:8 it states, “all liars…shall have their part in the lake which burneth with fire and brimstone…” Notice that it is the lake, which is burning with fire, and not a person’s mind metaphorically burning with tormenting thoughts, as some say.

John Wesley said, “Indeed, if there is any fire, it is unquestionably material. For what is immaterial fire?…Does not our Lord speak of it as if it were real fire?  No one can deny or doubt this…Does He design to freight His poor creatures?  What!  With scarecrows?  With vain shadows of things that have no being?  O let not anyone think so! Do not impute such folly to the Most High!”

If all the verses which mention burning fire are only a metaphor, then how could we ever take the rest of what the Bible says literally? Which parts are literal, and which parts would be a metaphor?