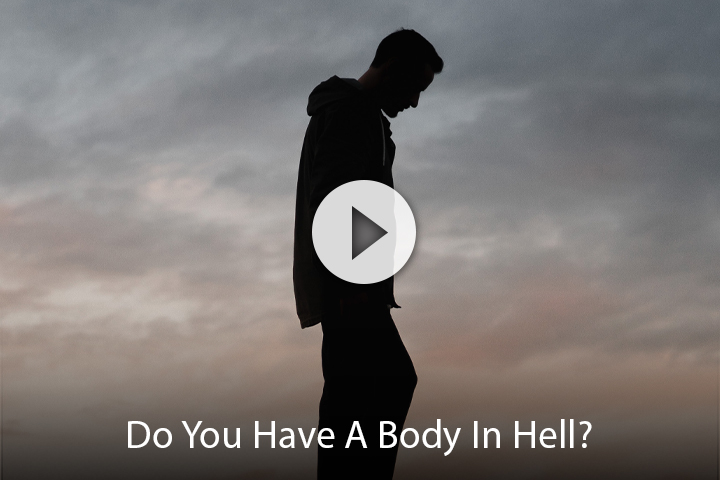 Do You Have A Body in Hell?

A person in the current hell (hades) has a spirit body and still possesses their soul, which consists of their will, mind and emotions. The Bible also seems to indicate that a person in hell still has an earthly resemblance.

In Luke 16:24, Jesus was talking about the rich man in hell. The rich man asked Abraham to “Have Lazarus dip the tip of his finger in water and cool my tongue; for I am tormented in this flame.”

This man had a tongue and he thirsted. He had eyes, and a mouth, which he spoke with. He felt the torment of the flames. He could think and he remembered his family. He didn’t want them to come there. He knew they needed to repent. In addition, he recognized Abraham and Lazarus, so they must have had spirit bodies to be seen and recognizable as well.

Ezekiel 32:21-29 says, “The strong among the mighty shall speak to him out of the midst of hell…her graves are round about him…they are gone down to hell with their weapons of war, and they have laid their swords under their heads, but their iniquities shall be upon their bones…with them that go down to the pit.”

Notice, they could speak. This indicates that they must have had a body of some kind.

Isaiah 14:9-10 states that those in hell could speak, and experienced weakness.

In the vision God gave me about hell, my body appeared the same as the one I have now. I need to point out that I do not know if the body I had in my vision was what a condemned person would have in hell. I was there in my spirit body and I was not condemned to hell.

1 Corinthians 15:44 mentions a natural body and a spiritual body.

When the demons tore me with their claws, it seemed as it were flesh. It may only seem like flesh, just as the rich man thirsted. Does a spirit body thirst? Apparently so! I noticed that after the demon tore open my flesh, there was no blood or water coming from the wound.

The spirit body I had was able to endure suffering that would have caused immediate death to my current physical body. So the spirit body a person is equipped with in hell has different limitations and endurance capabilities.

All my faculties seemed to work. I could think, reason, and remember. My emotions were still there, and although my strength was almost nonexistent, my physical senses were acute—I could see, hear, touch, smell, and taste.

I also had my memory. I knew I would never see anyone ever again. I missed life itself. All was dead, dry, colorless and barren. Isaiah 59:10 says, “We are in desolate places as dead men.”

I so longed to see things of life such as greenery, trees, flowers, the blue sky, sunlight, or feeling a breeze. Just having the strength to walk felt like a distant memory. I understood there was no hope and no escape. People have no idea what awaits them if they don’t repent and receive Jesus as their Lord and Savior.

Let’s look at what the Bible says about the body:

We can see then by examining the rich man account in Luke 16, Ezekiel 32 and Isaiah 14, and the above mentioned verses, a person has some kind of body in hell. Therefore, a spirit body in hell has similar attributes and desires as our physical body here on earth.