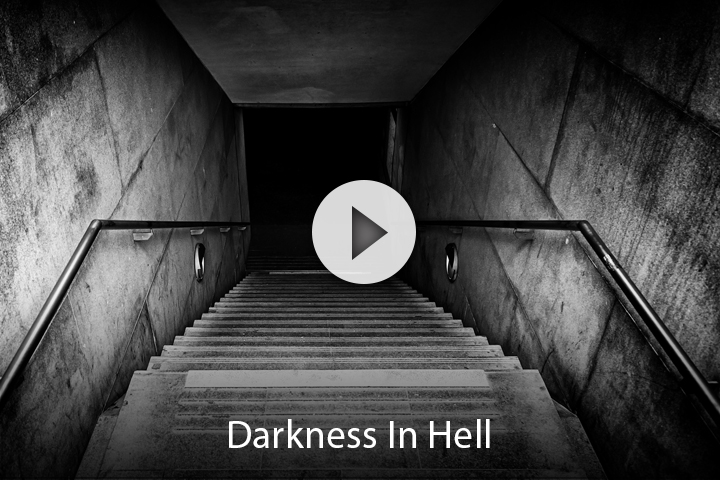 God gave me a vision of hell, which I write about in my book, 23 Minutes in Hell. One of the things I experienced was the most intense darkness.

At one point in my vision, I crawled out of the prison cell where I was first placed. It was totally black. I could actually feel it.  Exodus 10:21 speaks of “. . . a darkness which may even be felt.” It had a power that consumed me. It was not simply the absence of light. It had a distinctive evil presence…a feeling of death. It seemed to penetrate every cell in my body.

Lamentations 3:6 says, “He has set me in dark places, as they that be dead of old.”

Jesus said in Matt. 25:30, “cast him into outer darkness; there shall be weeping and gnashing of teeth.”

Try to imagine being in that state for all eternity, never able to see another person. The only visual glimpses that were slightly illuminated by the flames were hideous demons, snakes, maggots, and a baron wasteland of rock and raging flames.

THE PIT OF FIRE

When I was placed along side this enormous pit with flames raging high into this open cavern, I could see thousands of people burning and screaming. The flames were incredibly intense, yet the darkness seemed to swallow up the light. I have heard scientists say that within our universe are black holes, and the pull of gravity is so strong that it actually stops light from traveling. Hell is similar. Job 10:22 that says, “A land of darkness…and where the light is as darkness.” That verse seems to indicate the small amount of light that existed was as darkness. This may be a description of what I saw.

I was once in a coal mine in Arizona. The tour guide led us further down into the mine, until we reached the bottom. They proceeded to turn off the lights for only 30 seconds. Even during those brief moments, people began to panic. It left you completely disoriented, and truly afraid. Some people actually began to scream yet it was nothing like the blackness of Hell. If you don’t like the dark, you better be certain before you die of where you will spend your eternity.