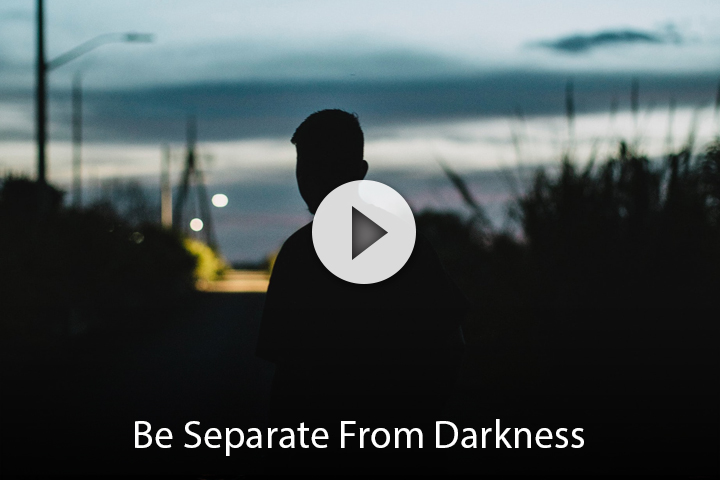 Be Separate from Darkness

There is a definite separation happening within our culture, our world, and in the Church. In Matthew 13:36-43, Jesus explained the parable of the Wheat and The Tares. He said, “The Son of Man will send out His angels, and they will gather out of His kingdom all things that offend, and those who practice lawlessness, and will cast them into the furnace of fire.” This happens at the end of the age, and we can see that we are definitely in last days now. The darkness is getting darker and the light is getting brighter. The contrast between good and evil is becoming more and more evident.

1 John 2:19 speaks of the Anti-Christ spirit which is at work in the world. It states, “They went out from us, but they were not of us; for if they had been of us, they would have continued with us; but they went out that they might be made manifest, that none of them were of us.” This is true today. The tares are mixed in with the wheat. By outward appearance, some will appear to be a trustworthy ally of the Gospel yet many have succumbed to deceptive teachings. They now persecute what is godly, water down biblical values, and oppose those standing for truth. They are found in the political arena, in Hollywood, and some even within the church itself. They are filled with self-righteousness, quick to point the finger, and claim to be defenders of good. In reality, they have become hypocrites. They are just as Jesus said to the Pharisees in Matthew 23, “For you are like whitened tombs, which outwardly appear beautiful, but inwardly are full of dead men’s bones, and of all uncleanness.”

2 Corinthians 6:17 says, “Come out from among them and be separate, says the Lord. Do not touch what is unclean, and I will receive you.” The Lord is commanding us to be separate from the world’s thinking and its practices. We must ask ourselves, “Have I allowed myself to take on the attitude of those around me, because I am angry and offended? Am I following the ideas of some who have grown insensitive to God and His Word? We must be the light in the world as Jesus said in Matthew 14. Our standard of truth and good has not changed. As Christ followers each of us must ask God to show us how to be more like Him in a world that desperately needs hope and uncompromised truth.