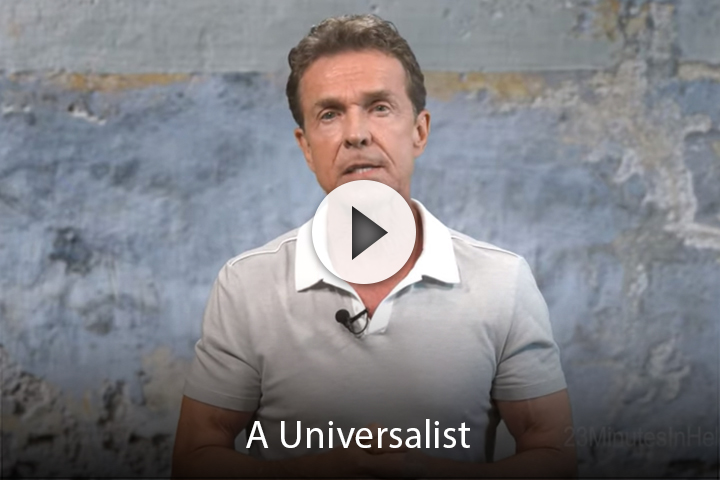 Someone who believes that all men are saved and will go to heaven, no matter what a person believes is called a Universalist. They say a person may go to hell for a period of time, but will eventually leave hell, and enter heaven. A Universalist states that their main objection to eternal punishment is that God is love. He would never allow such suffering. They fail to realize that God is also a God of justice and judgment.

Our sin is deserving of eternal punishment because of whom we have sinned against. I have a video titled, Why An Eternal Hell Is Justifiable, which provides further understanding. They also reject an eternal hell because of several scriptures from the Bible, which they have misinterpreted. Here are just two of thee verses they reference:

They believe this verse says all men are now saved, no matter what they believe. The verse doesn’t say that all men are saved. It says He is the Savior of all men. Jesus died for all men, so salvation is AVAILABLE to all men. Salvation is available because He paid for our sins on the cross. It doesn’t mean we can live a godless life, and even reject Him, and be saved. We have to repent and receive Jesus as our Lord and Savior, as the abundance of Scripture states.

Also, they ignore the first part of the verse, which says, “We suffer reproach, because we trust in the living God, who is the savior of all men, especially of those that believe.”

You have to trust in the living God

From Nelson’s Bible Commentary page 1602,  “God as the one who gives life, breath and existence to all. This part of the verse, especially of those who believe draws a contrast between God’s common grace to all and His special saving grace to those who trust Him as their Savior.”

Man has the free will to trust Him, or reject Him, thereby determining their eternal destiny

Did you catch that; “shall not see life.” There is no getting out of hell.

Jesus said in John 6:40, And this is the will of him that sent me, that everyone which seeth the Son and believes on him may have everlasting life.

In Luke 13:3 Jesus said, Unless a man repent, ye shall all likewise perish. Repentance is a requirement for salvation.

Another verse used incorrectly is:

1 Corinthians 15:22 For as in Adam all die, even so in Christ shall all be made alive. They believe all are made alive thereby all are saved.

2 Peter 3:9, The Lord is not willing that any should perish, but that all should come to repentance. In other words, some perish, if they don’t repent.

Galatians 3:22, But the Scripture hath concluded all under sin, that the promise by faith of Jesus Christ might be given to them that believe.

Revelation 20:12-15 says, and death and hell delivered up the dead which were in them, and they were judged, every man according to their works. And whosoever was not found written in the book of life was cast into the lake of fire. These are not going to heaven.

Philippians 3:18, the enemies of the cross of Christ, whose end is destruction. Their end is not heaven, but destruction. No reprieve.

Will you believe a Universalist, or Jesus?

Will People In Hell Repent?

Will Everyone Go To Heaven?

Hell: Separate Truth From Fiction And Get Your Toughest Questions Answered Book By Bill Wiese