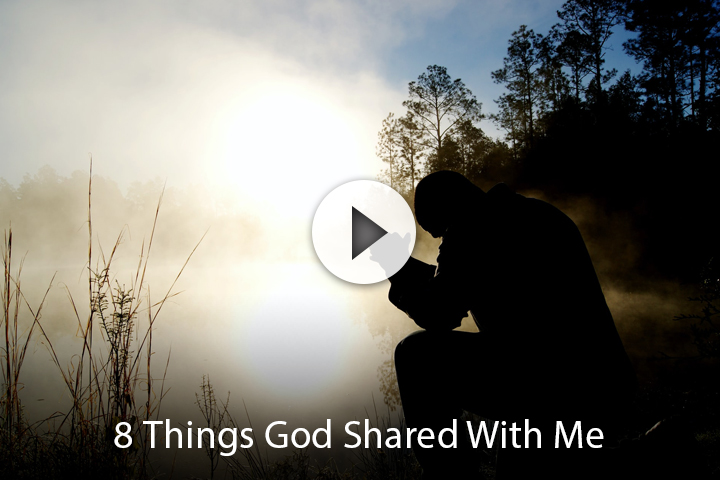 On November 23rd 1998, God gave me an out of body experience that is classified as a vision in the Bible. This was not a near death experience, but a vision of Hell. I was a Christian at that point for 28 years, serving God in the Church in various capacities. After seeing hell and all its horrors, I was then lifted up out of this dark tunnel, full of demons.

Suddenly the Lord appeared in a bright light. I didn’t see His face, but just the outline of a man. I knew immediately who He was. I said, “Jesus.” He said, “I Am.” When He said those two words, I fell to the ground. I don’t know if I passed out or died, just as John did in Revelation 1:17.

After a time, He touched me and I came back to my awareness. I was so very grateful that I was already a Christian and that I had been saved from hell. I didn’t want to ask Him any questions. I just wanted to thank Him and praise Him.  After a time though, thoughts started coming to my mind. He then began to answer my thoughts, as described in Psalm 139:2.

There were eight things God shared with me:

My first thought was, “Why did you send me to this horrible place?”

My second thought was, “Why would anyone believe me? They will think that I had a bad dream, or that I’m crazy?” He said, “It is not your job to convict their hearts. That responsibility belongs to the Holy Spirit. It is your part to go and tell them. Tell them about this place and that it is not my desire that any should go there.” I said, “I’ll go” however I didn’t want to share this experience with anyone, but I did have a burden and passion to witness to everyone. I only shared my experience with one close friend and my mother, and it spread from there.

My next thought was, “Why did those demons hate me so much?” He said, “Because you are made in My image, and they hate Me.” John 15:18 verifies this.

Next, I thought, “Those demons are so powerful!” Jesus said, “All you have to do is cast them out in my name.” Suddenly they appeared to look like ants on the wall of this cavern. Yet, some that were 12 feet tall now appeared so small. I believe He was showing me that when using the name of Jesus, demons are nothing. They are not to be feared, just as an ant wouldn’t be. We have been given the authority to use His name, and demons must obey, as Luke 10:19 states.

Next, I thought, “Why didn’t I know you?” He said, “I kept it from you.” I understood that if I was there as a Christian (which I was but did not realize) I would have known He was getting me out of this horrible place. He wanted me to experience the hopelessness that an unsaved person would feel. On Earth, we always have some form of hope. Even amidst the most direful situations, we can die to escape the pain. But in hell, you understand that your soul cannot die and you will never escape. To understand that you are lost forever was by far the worst part of hell.

I want to explain scripturally how God blocked it from my mind that I was a Christian. In Luke 24:16 where Jesus appeared to the disciples on the road to Emmaus, it says, “Their eyes were holden that they should not know him.” John MacArthur’s commentary, page 1335 says, “They were kept by God from recognizing him.” God had hidden it from their minds just as He did from mine, in order for me to experience the hopelessness.

I then saw a vapor of smoke and I thought, “What was that?” I believe it was the Lord speaking to my mind, or heart saying, “It’s your life.” I felt in my heart that we don’t have much time in life but what we do for Him, He will reward us for all eternity.” That gave me a better overall eternal perspective. James 4:14 says, “Life is but a vapor.”  Life is so very short.  If we Christians could grasp that fact, we would be attending more to the things of God, and not focusing on things of little or no importance.

Next I heard, in my Spirit these words, “My people make excuses why they don’t witness.” They say, ‘I didn’t feel led.” They fear man rather than God. Of course we all need to be led by the Holy Spirit however many times we use that as an excuse to refrain from sharing the way of salvation with others. We fear people rather than God.

I felt in my heart that we are near the end. I felt an urgency to share the way of salvation with others. I believe He has delayed His coming as the scripture says in Matthew 25:5, so more people have the opportunity to turn from sin, repent and give their lives to Jesus.

That window of opportunity is rapidly coming to a close.