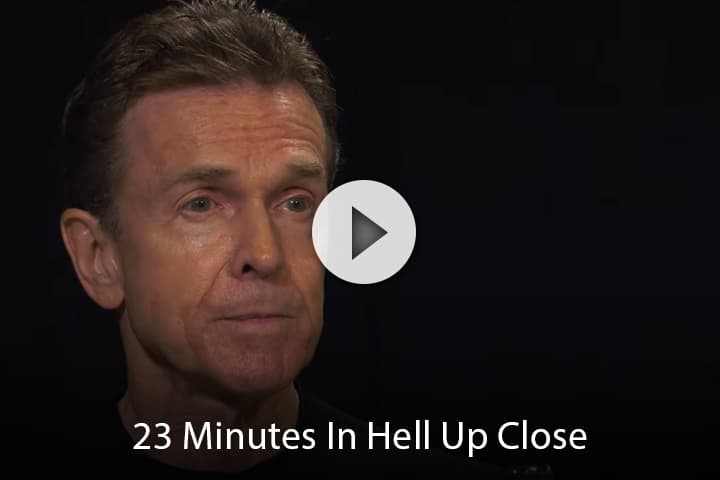 23 Minutes In Hell Up Close

On November 23rd, 1998, God gave me a vision of hell and it changed my life. I had never had a vision before and I had never studied the topic of hell. I have never gone to dark movies. I’ve never consumed alcohol, and I’ve never taken drugs. Everything I’m going to tell you about hell is already in the Bible so it’s not important you believe my experience, only the Word of God. My wife and I came home from a prayer meeting we attended every Sunday night. There was nothing unusual about the night. We went to bed and I got up at three o’clock in the morning to get a glass of water. Suddenly, I was pulled out of my body like being drawn up out of your body. I first found myself falling down this long dark tunnel. And then I ended up in this filthy, smoke-filled dungeon with stone walls, and bars.

There were two enormous demons pacing in this cell, like vicious, caged animals. They were reptile like in appearance. They had the most ferocious demeanor and extreme hatred for God and man. I wondered, “How did I get here? Why am I here?” The heat was like a blast furnace. It was unbearable. I had absolutely no strength in my body whatsoever and movement was almost impossible. One demon picked me up and threw me into the stone wall of that cell with a tremendous force and the other demon dug it’s foot long claws into my chest. “Why am I still alive through this?” I noticed there was no blood or water coming from the wounds. Leviticus 17:11 says, “The life of the flesh is in the blood.” There’s no life in hell, so there’s no blood. You have a body in hell, just like the rich man in Luke 16. He wanted just one drop of water because he was tormented in the flame, but you never get that drop. The thirst is unimaginable.

It was absolutely pitch black, except for a few moments when God illuminated it. I saw this large pit with flames raging high into this open cavern. And there were thousands of people inside this pit, screaming and burning. They just looked like skeletons. The screams were so loud and deafening, you can’t bear it. I understood I was down deep in the Earth and that there are different levels of torment and degrees of punishment, but all levels are horrendous. I thought about my wife up on the Earth, and I knew I would never see her again. I could never hold her. I could never tell her I love her. I could never even say goodbye to her. To have no finality with your loved ones is extremely tormenting. I missed her so much. You will never be able to talk to people again. You are kept isolated for all eternity. You see, death does not mean cease to exist. Death means separation from God. You still exist.

There Are Demons In Hell

Then there is the stench of hell. The demons are so foul and putrid, and there is the worst open sewer smell, as well as the smell of burning sulphur. It’s actually toxic to breathe, but there’s not enough oxygen to breathe in hell, so you are suffocating. You never get to go to sleep. There is no rest, not even for one second. You experience hunger and thirst and it’s never satisfied. The fear is overwhelming. When I was young, I was attacked by a 10 foot tiger shark. The fear that I felt then, paled in comparison to what I felt in hell.

I saw snakes and maggots crawling all over everything and everybody. There were demons that were even 12 and 13 feet tall, twisted, deformed, and grotesque. But the worst part of hell is the hopelessness. There is no escape. There is no end to this horror, and there is no one that will ever come rescue you. You are eternally lost in this place.

When I was in this dark tunnel, suddenly a bright light appeared. It was Jesus. I fell at His feet. I don’t know if I died, but He touched me and I came to. I realized that if He hadn’t gone to the Cross, I would be in this place for all eternity. I was so grateful for the Cross. I just wanted to thank Him over and over and over. Jesus shared eight different things with me and I share those in my full testimony, but the most impactful part of this vision was that Jesus allowed me to feel a piece of His heart. The great love He has for people. It was overwhelming.

Hell Was Prepared For The Devil and His Angels

The real reason hell is so horrible is because it’s a place absent from God’s goodness and His attributes. James 1:17 states that all good comes from God. It’s not automatic. Hell was prepared for the devil and his angels, not for man. But if someone rejects Jesus as their Lord and Savior, there is no other place for them to go. God doesn’t want anyone to go to hell, but He gives us a free will to choose. Jesus said in John 14:6 that He is the only way to heaven. You can choose to believe Him or reject Him. It is your choice. Maybe you say that you don’t believe in hell. What if you’re wrong? What if there is an afterlife? What if Jesus was telling us the truth? Are you really willing to gamble with your soul?