Is Hell Real – Part I

If we do not believe in an eternal hell, then we call Jesus a liar. He spoke of hell in 46 separate verses.

If there is no hell, then there would be no justice ever served. What about the Hitler’s of the world or the child abuser or murderer?  Is it justice that they go unpunished?

Why did Jesus suffer so much for our sins if we only have to endure annihilation? 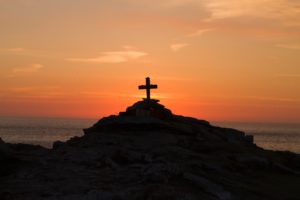 God Gave His Only Son

We can understand there is a repulsion to an eternal place of torment. But at the same time, we have to understand that God gave the most precious thing He had to keep us out; His own Son!

Also, do we reject what Jesus said because it’s offensive? Do we risk our own eternity and believe our own opinion as truth?

Most people believe in Heaven, but not nearly as many believe in hell. Could it be because people do not want to be held accountable for their sins? Another issue seems to be that many cannot reconcile a loving God with a God who would allow eternal torment. God is not only love, but He is holy and just, and our sin deserves eternal punishment.

I think it best to simply read the Scriptures, and take them at face value.

The Rich an In Hell

In Luke 16, Jesus spoke of the rich man, “And in hell he lift up his eyes, being in torments…for I am tormented in this

flame…” This was not a parable for two reasons; first, no other parable has a name in it, and this has three names. Second, Jesus said in verse 25, “But Abraham said…” If it was a parable then Abraham really didn’t say it, which would make Jesus a liar. He said that “Abraham said.” It had to be a true story for Jesus to make that statement.

Jesus said in Matt.13:41-42, “The angels shall gather…them which do iniquity; and cast them into a furnace of fire: there shall be wailing and gnashing of teeth.” How can one gnash his teeth if he doesn’t exist, or if there is no hell? Where are they gathered to? Ps. 26: 9 says, “Gather not my soul with sinners.”

Look at Luke 12:46, where Jesus mentions that servant. He will, “Cut him in two, and appoint him his portion with the unbelievers.” Where are they appointed to if there is no hell?

Why did Jesus say in Luke 12:4-5, “Be not afraid of them that kill the body, and after that have no more that they can do. But I will forewarn you whom ye shall fear: Fear him which after He hath killed hath power to cast into hell.” His statement is clear that there is something which lies ahead which is worse than dying physically! Jesus said to Judas, “It had been good for that man if he had not been born.”

Jesus also said in Matt. 18:6, “But whoso shall offend one of these little ones which believe in me, it were better for him that a millstone were hanged about his neck, and that he were drowned in the depth of the sea.” In other words, there is something coming after that is worse than drowning.

Even the agnostic British philosopher and social reformer Bertrand Russell said, “There is one very serious defect to my mind in Christ’s moral character, and that is that he believed in hell….Christ certainly as depicted in the Gospels did believe in everlasting punishment…” (Robert A. Peterson, Hell on Trial, pg. 4)

If there is no hell, then why did Jesus Christ die a horrific death on the cross according to the Scriptures and rise from the dead? To save us from what?

Did Jesus Talk About Hell?